In a weird twist, the worst man-made disaster in history has provided a new home for endangered Przewalski’s Horses. 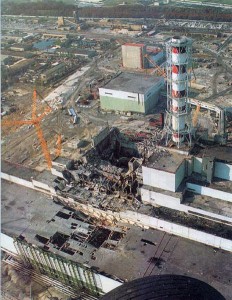 Chernobyl reactor 4 after the explosion.

of the night on April 26, 1986, an explosion at the V.I. Lenin Nuclear Power Station near Chernobyl, Ukraine, changed history.

Nuclear fallout was discovered on the other side of the world within a week. Nearly half a million people were resettled from contaminated areas. The number of deaths attributable to the disaster is unknown.

The cleanup became a huge financial burden on the Soviet Union, and the government’s secretiveness about the disaster led to a demand for reforms (glasnost) that precipitated the crumbling of the Soviet empire.

What began as a test of the backup cooling system for reactor 4 turned into a series of haphazard, non-procedural decisions by the inexperienced night crew of a flawed Soviet-designed power plant. Chernobyl was a ticking time bomb the day the station went online in 1977.

The morning after the accident, a Saturday, it was business as usual in the largest town near the Chernobyl plant, Pripyat, with a population of 50,000. Residents noted some changes around them but were told only that there was a fire at the power plant. The streets were filled with police and the reactor could be seen burning and damaged in the distance. 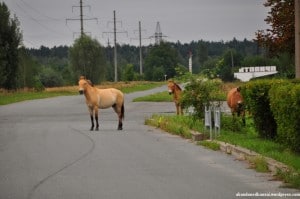 Przewalski’s Horses living near the abandoned town of Pripyat, near the Chernobyl plant. Photo by Florian Seidel

hours after the explosion, long after a cloud of radioactive particles had been spewed over the area, 135,000 local residents within a 30-kilometer (18.6-mile) radius around the reactor (called the “Zone of Exclusion”) were bussed out. They were told to leave everything except enough clothing for a three-day evacuation, but very few residents were ever permitted to return. Even their cats and dogs were left behind.

Built in 1970 to house the young families and employees of a “peaceful atom” nuclear power plant, Pripyat is now being swallowed up by the surrounding forest, a decaying relic of the Soviet era’s “city of the future.”

The Przewalski’s Horse (pronounced /szheh-VAHL-skee/) is often mistaken as the ancestor of today’s horses and ponies. Instead, it’s a cousin of the backyard horse, but scientists aren’t certain where to put the Przewalski’s Horse in the equine family tree. Part of the confusion stems from the fact that Przewalski’s Horses have interbred with domestic horses at some point in history.

Unlike mustangs, brumbies, and other feral horses, the Przewalski’s Horse is a truly wild animal with two extra chromosomes that has never been domesticated by humans. It’s named after Nikolai Przewalski, a Russian-born explorer of Polish descent who first took a skull and hide of the animal to the West.

Around 1900, several Przewalski’s Horses were caught and taken to zoos in the West, which was fortunate because the horses became extinct in their natural habitat around 1969 due to a combination of hunting, competition with domestic animals for grazing and waterholes, and harsh winters. The horses taken into captivity are the ancestors of all modern Przewalski’s Horses. 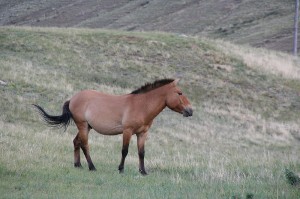 A Przewalski's Horse at Hustain Nuruu National Park in Mongolia. Photo by Aloxe

Beginning in 1992 captive-bred Przewalski’s Horses were released in a nature preserve in Mongolia, the first time in 20 years the species had roamed wild in its natural habitat. Other preservation programs exist in Germany, Ukraine, Hungary, France, China, and the U.S. The horses have been reintroduced into the wild in other protected habitats in China and, strangely enough, near the Chernobyl nuclear power plant in Ukraine.

It’s estimated that there are close to 2,000 individuals left in the world, which the International Union for Conservation of Nature classifies as “endangered.” 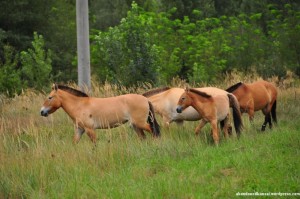 A herd of Przewalski’s Horses near Chernobyl. Photo by Florian Seidel

reactor meltdown, animals in the area began to die from radiation sickness and the survivors appeared to suffer infertility. But native wildlife like wolves, elk, bears, eagle owls, and boars soon returned to the area. Birds can be found nesting within the sarcophagus structure that covers reactor 4. But scientists don’t know what long-term damage the animals may have suffered or could pass on to the general population.

Przewalski’s Horses were introduced to the Zone of Exclusion in 1998 in order to restore biodiversity in the area. The horses that had already roamed freely at a nature preserve in Ukraine fared the best, forming the foundation of the herd today. Those brought in from zoos didn’t adapt well and died. 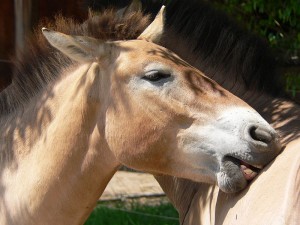 Przewalski's Horses at a zoo.
Photo by BS Thurner Hof

they now live in a protected area, the Przewalski’s Horses near Chernobyl face a familiar threat from the past. People are drawn to the area for a variety of reasons, including morbid curiosity, looting, income from tourism, and hunting. Przewalski’s Horses are being killed by poachers for food and target practice. The damage from hunting has far surpassed the horses’ natural mortality rates and now the herd is half its 2003 population. Unfortunately there is very little funding for researchers to track the herd more closely.
* * * 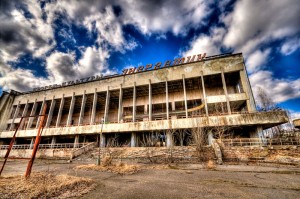 The decaying Palace of Culture in Lenin Square in Pripyat. Photo by Timm Suess

disaster, a sarcophagus enclosing hundreds of tons of radioactive material was constructed around reactor 4 using 400,000 cubic meters of concrete. But the original structure is aging and a new “confinement shelter” costing more than $1 billion is being built to replace the sarcophagus.

Incredibly, the last functioning reactor at the plant wasn’t shut down until 2000. Even today there are people who work at the site to decommission reactors 1, 2, and 3, which requires moving spent nuclear fuel to a safe, permanent storage facility. 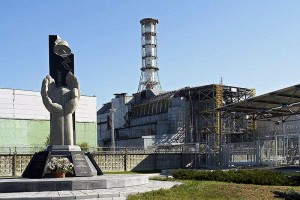 A monument to the emergency workers stands outside the sarcophagus. Photo by Mond

In 2011 tours began of the town of Pripyat and sites near the Chernobyl plant, allowing curious visitors to see how nature is taking over the Zone of Exclusion and to take photos of the infamous site. Radiation tends to accumulate in the soil and plants, so tourists are instructed to stay on paved surfaces to minimize exposure. Following precautions, Chernobyl visitors usually receive about the same amount of radiation exposure as they would getting dental xrays.

There are fewer than 500 people who reside in the Zone of Exclusion, many of them elderly women who live off the land. Employees who work in and police the Zone of Exclusion stay at a hotel in the small town of Chernobyl for about four weeks at a time to limit their radiation exposure. Meanwhile, the zone may not be safe for permanent residents for another 20,000 years.

2 thoughts on “The Wild Horses of Chernobyl”