What is a quadriga?

The ancient Triumphal Quadriga displayed inside the museum of St. Mark's Basilica, Venice.

to be the first Olympic sport in ancient Rome, as well as the only sport in the original Olympiad that was not performed in the nude. To simplify control for the driver, only two-horse chariots, called bigas, were used in battle. However, chariots featuring more than two horses were often found in competition.

One of the most common teams used in ancient chariot racing was the quadriga, or four-horse chariot. The quadriga is often found in artwork on vases, friezes (bas relief sculptures on the fronts of ancient buildings), and as statues adorning bridges or arches. Ancient Romans believed the sun was the god Apollo driving a quadriga across the sky each day.

The oldest surviving quadriga, the Triumphal Quadriga, stood at the Hippodrome of Constantinople and may be around 1,700 years old. Although it’s called a quadriga, it does not include a chariot and driver. It was moved to St. Mark’s Basilica in Venice in the 13th century, where it remained until Napoleon ordered that it be sent to Paris to stand at the Arc de Triomphe du Carrousel near the Louvre for about 15 years.

The Brandenburg Gate quadriga in Berlin. The Iron Cross near the top is a symbol of Prussian rule. Image by א (Aleph) from the Wikimedia Commons

it was returned to St. Mark’s Basilica until the 1980s, when air pollution was taking its toll on the ancient sculpture. The original Triumphal Quadriga was moved inside the basilica museum and replaced outside by an exact copy.

Many other quadrigas can be found around the world, most of which are based on the Triumphal Quadriga. One of the most famous is on the Brandenburg Gate in Berlin, which Napoleon also took to Paris around the same time as the Triumphal Quadriga. The Brandenburg quadriga was returned to Berlin after Napoleon’s defeat where it became a symbol of Prussian rule and later the Nazi political machine. Newly renovated, the Brandenburg quadriga can still be seen in its original location.

When the Triumphal Quadriga was returned to Venice in 1815, it was replaced atop the Arc de Triomphe du Carrousel by another similar quadriga with a chariot driven by the angel of peace and flanked by two winged victories.

The quadriga atop the Wellington Arch in London. Photo by ChrisO in the Wikimedia Commons

The Wellington Arch in London is topped by the largest bronze sculpture in Europe, a quadriga created in 1912. It depicts the angel of peace descending into the chariot of war and the horses are being lead by a young boy who was modeled after the son of Lord Michelham, a wealthy philanthropist who funded the sculpture. (Lord Michelham was also famous for having bred the great racing broodmare Plucky Liege, who is said to be found in the pedigree of every great racehorse.)

There is also a quadriga on the front of the Bolshoi Theatre in St. Petersburg, Russia; atop the Grand Army Plaza in New York City; above the entrance of the Minnesota State Capitol in St. Paul; and two quadrigas appear on the Wayne County Building in Detroit, Michigan. 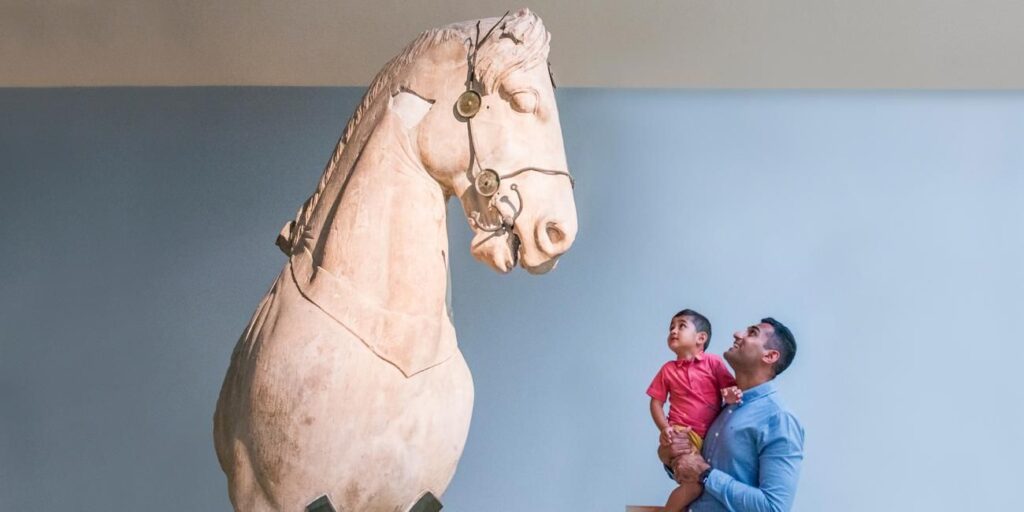 One of the colossal horses from the quadriga that stood on top of the Mausoleum at Halikarnassos, Turkey, about 350 B.C. Photo from the British Museum

Possibly the biggest quadriga in ancient history was the huge marble sculpture that appeared at the top of the Mausoleum of Halikarnassos in Turkey, considered one of the Seven Wonders of the Ancient World. One of the colossal horses from the quadriga can be seen at the British Museum in London.

The Buddy Bear Quadriga in Berlin. Photo by Dorisrieck

Quadrigas don’t always feature horses. In particular, Germans seem to like using other animals in their chariot statues. The quadriga on the top of the opera house in Dresden features panthers; the Quadriga of the Siegestor in Munich has lions, and the Buddy Bear Quadriga in western Berlin has, you guessed it, bears pulling a chariot driven by another bear.

Below is a video with a pictorial history of the Triumphal Quadriga, also known as the Horses of St. Mark’s.

What is an OTTB?

What is a punch?

The Horse Who Played Phar Lap

The Humane Movement Goes to Hollywood to Protect Horses

Is it wrong to have a crush on a horse? The beauti