The winner is the horse that crosses the finish line first, regardless of whether it has a rider. 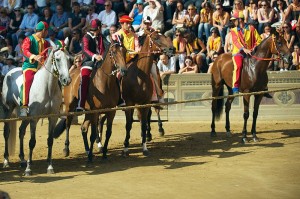 The banners of the contrade. Photo by wpopp

Siena’s 17 contrade, or city wards, are represented by different symbols that are displayed on signs throughout the city: Caterpillar, dragon, eagle, forest, giraffe, goose, owl, panther, porcupine, ram, seashell, snail, tortoise, tower, unicorn, wave, and wolf. There are only 10 spots in each race, so a lottery is held to determine which contrade can compete. The ten fastest local horses are assigned to the contrade by random draw (which sometimes involves bribery). All horses must be of mixed lineage.

The city of Siena puts a thick layer of packed dirt on the streets around Piazza del Campo four days before the race. Jockeys spend those days running their mounts around the track to become familiar with the track surface. The evening before the Palio, a huge feast for 25,000 in the streets of Siena begins the festivities. 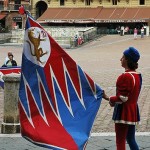 The flagbearer of the panther (Pantera) contrada during the Corteo Storico. Photo by Jastrow

On the morning of the race each competing contrada leads its horse into a local church to be blessed by a priest who utters the words, “Go and return a winner.” As many contrada residents as possible pile into the church to witness the blessing.

palio refers to the silk banners that are painted with the symbols of each contrada. Just before the race, a parade of the banners and jockeys called the Corteo Storico moves its way slowly through the city with participants in medieval costumes waving banners and playing drums and silver trumpets. At the end of the parade is a ceremonial throwing of the Palio banners.

the start of the race, nine of the ten entrants stand nervously side by side between two ropes until the tenth horse enters the area, at which time the ropes fall and the horses leap forward. For the next 90 seconds, the horses and jockeys battle their way around the Piazza del Campo three times while 60,000 spectators cheer on their favorites.

The winner of the race is the horse that crosses the finish line first, regardless of whether it has a rider, and the winning contrada receives the coveted drappellone, or big drape, that will be put on display in the contrada‘s museum. The loser is considered to be the second-place horse, not the last one to cross the line. Crowds storm onto the track and surround the winner as soon as the race is over. It can become so chaotic that fights break out between members of rival contrade. The winners celebrate their victory late into the night.

A cavallo scosso, or loose horse.
Photo by Janus Kinase

Animal rights activists are critical of the Palio because of the risks to the horses. It’s common for several to fall, hit barriers, or collide with one another during the race, and nearly 50 horses have died in the Palio since 1970. Supporters of the race argue that more horses die in the once-a-year Grand National steeplechase at Aintree each year than the twice-a-year Palio di Siena. 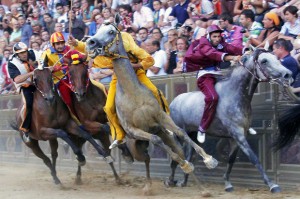 The chaos during the 90-second race. Photo by Fabio Muzzi/AFP/Getty Images

There are several other palios held throughout the year in Italy, some of which feature weapons contests or donkey or boat races, but Il Palio di Siena is the most famous. Juvenile fiction author Marguerite Henry captured many of the traditions and excitement of the Palio in the 1960 book, Gaudenzia, Pride of the Palio, which is out of print but used copies can be purchased online.

In Italy Online has a good first-person account of the highly competitive Sienese culture and the months-long preparations that go into the Palio. That site also offers tickets to the event. Below is a video of the 2019 Palio di Siena.