Silver dapple is a dilution gene that lightens black hairs on horses, but doesn’t affect red hairs. If a horse inherits one copy of the gene from a parent, it will express the silver dapple gene… as long as the horse isn’t chestnut. Because the gene has no effect on red hairs, it’s effectively “invisible” on chestnut horses.

On a bay horse, silver dapple lightens the black hairs so the legs turn a chocolate color and the mane and tail can range from chocolate-colored to blond. On a black horse with the silver gene, the entire body can be a mousy-grey color, often with lots of dapples, and the mane and tail tend to be a streaky blond mixed with the mousy color.

A rare breed outside of France, the Comtois is virtually always silver dapple bay or black, but the breed’s registering authority calls it chestnut. 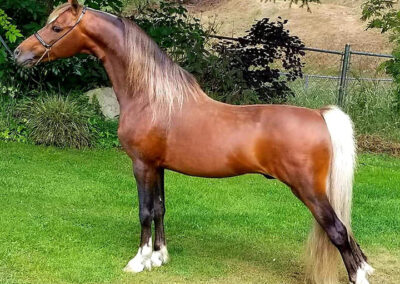 Genetic abnormalities to be aware of

Silver dapple horses should be tested for MCOA before being bred. The University of California—Davis offers a low cost test. It’s not recommended that two silver dapple horses be bred to each other due to the risk of MCOA in the foal.

While chestnut and white-grey horses won’t express the silver dapple gene, they can still carry the gene and pass the risk of MCOA to offspring. So it may be necessary to test a chestnut or grey horse for MCOA if one of its parents was identified as silver dapple.

Silver dapple is easier to find in Shetland Ponies, Icelandic Horses, and Rocky Mountain Horses. The color is also found in Morgans, Saddlebreds, Tennessee Walkers, Missouri Foxtrotters, Quarter Horses, Paint Horses, and Appaloosas. Among rarer breeds, you can find silver dapple colors in Gypsy Vanners and Comtois draft horses. Check out these photos of silver dapple Morgans all over the world.

The equine hero of Soviet sports, Absent. An #Akha