What is a jennet? 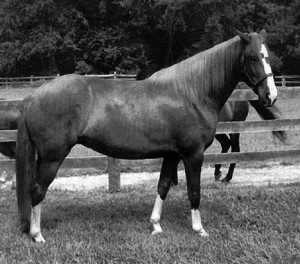 Cassandra del Indio, a Paso Fino mare bred by Casa de Carrico. She exhibits many of the jennet traits. Reprinted from Conquerors by Deb Bennett, PhD.

I’m not talking about a jenny, a female donkey, but a jennet — a type of horse that is the foundation of many modern breeds.

The jennet, pronounced “JEN-it,” was the result of crossing Barbs, or Barbary horses from Morocco, with Iberian stock in Andalucía, Spain. Islamic Berbers conquered a portion of Spain beginning in the 8th century AD until the 11th century AD, and they brought many of their native Barb horses with them.

“Generally built a bit close to the ground, they possessed a wide breast with forelimbs set fairly close together. The chest was deep, surmounted by a shapely, muscular neck. The tail was set fairly low on a rounded and sloping croup. The mane and tail were thick and slightly wavy. The short head, topped by small, stemless ears, was wedge-shaped, much broader through the forehead than the muzzle. Its profile could be straight or slightly convex. It often presented undulating nasal bones… Originally, however, the head was not long and narrow, nor was the facial profile strongly arched like a ram’s — or like a Warmblood’s.” 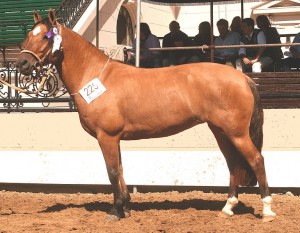 An Argentine Criollo mare with strong jennet type. Photo by Luciodec from the Wikimedia Commons

The term “jennet” is derived from the Spanish phrase à la jineta, which refers to the “balanced seat” style of riding where the rider bends his knees and the ankles are below the hips. This style permits the horse to round its back and coil its loins for more collected and agile movements.

(The other style of riding developed in Spain centuries ago is “à la brida,” where the rider sits stiffly on the horse with the legs straight and the feet braced against the stirrups. A similar style of riding is often found in modern English pleasure, park, and gaited horse classes at shows. This style tends to hollow the horse’s back and lift the neck, making proper collection difficult.)

At the time the jennet-type horse was developed in the 1500s, posting at the trot had not yet been invented. (It would come later in the mid-1700s.) Horsemen wanted a comfortable riding experience so they sought gaited horses that “ambled” instead of trotted. As a result, many jennets were gaited horses, later known as “caballos de paso.” They were able to do a running walk that was smooth over great distances, leaving the rider less tired and sore after a long day of riding. 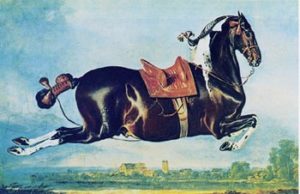 Cerbero, a painting of a Spanish haute école horse by J.G. von Hamilton.

With the development of haute école (later to become dressage) in the 16th century, “ambling” or gaited horses were phased out of European breeding. Jennets were crossed with other types of non-gaited horses, like the Warmblood and the Thoroughbred, to produce taller and heavier horses for royalty. Fewer horses were exported to the Americas by this time because the New World had plenty of them already. Consequently, the jennet in the Americas developed into a different type of horse and the New World became the only place amblers could be found consistently.

The jennet is the foundation of the Andalusian and Lusitano, but those breeds are not purely jennet in type. The Andalusian was the product of Warmblood-Thoroughbred-jennet breeding like its cousins the Friesian and the Lipizzan. All these breeds are taller with finer legs than the historical jennet, and those individuals with Roman (convex) profiles owe the trait to Draft infusions.

The modern breeds that most resemble the original jennet were developed in the Americas: The South American Criollo, the paso breeds (the Paso Fino from the Caribbean and the Peruvian Paso), and the Brazilian Mangalarga and its relative, the Campolina. These breeds are not exact replicas of the jennet because they also have lines to modern Arabians, Thoroughbreds, and Saddlebreds.

A new breed registry, the Spanish Jennet Horse Society, is attempting to recreate the gaited jennets sometimes portrayed in history as having Appaloosa patterns or pinto markings. The organization registers two types of these gaited, colored jennet-type horses: Atigrado, or horses that are at least 50% Paso blood with Appaloosa markings; and Pintado, or purebred Paso horses with pinto markings.